Great wedge players utilize a series of efficient golf tips to hit shots that help generate birdies and save pars.

Most amateur golfers struggle when it comes to hitting a great wedge shot. Usually, the problem can be corrected with a subtle adjustment, whether it be consistency or a fundamental deficiency.

Regardless of whether you are a professional golfer or a weekend warrior, you can get better with your pitch shots or full swing wedge shots.

In this article on how to hit wedges, we’ll analyze a few of the best wedge tips from the best professional golfers around.

Fowler’s wedge play from longer distances is admired by many professional golfers in the golf industry.

With any golf club, especially the wedge, Fowler generates spin and accuracy with a combination of the right grip pressure, the ability to replicate the same swing, and his confidence to attack the green, even when facing a tucked pin.

Keeping the Swing Short and Sweet

Rickie Fowler likes to keep his swing length short and wide around the body for generating control. This allows him to hit the ball with his entire body on a full shot, even if he’s using a gap wedge or pitching wedge.

This move creates more power and eliminates the possibility of a disjointed takeaway, allowing for a better approach shot strategy with the compact swing.

If you struggle to find the sweet spot on a full swing with your wedge shots, Fowler recommends getting smaller with your swing length during your practice time.

This means striking shorter practice shots using a disciplined method of maintaining grip pressure with moderate swing power to understand the feel when it comes time to hit wedges at full speed.

Let’s look at how he does it: 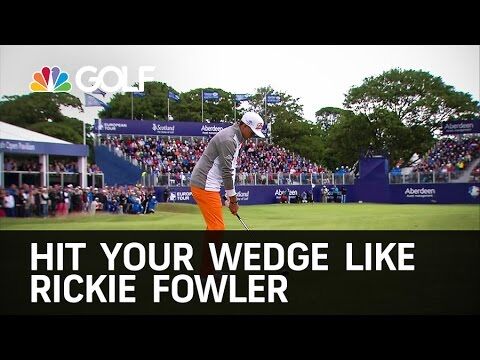 Before Tiger and Phil dominated the professional tours at the same time, Ernie Els was known as a wedge master. The South African native brought home over 70 professional wins, including four major wins, mainly due to his proficiency to control the ball with a wedge club.

For Els, half the fight is making sure you have the right clubs in your bag with the right specifications. Wedges with specific grinds allow him to open the face of the club to create the spin he needs to stop the ball on the green.

After you find the right wedges for your bag, Els’ first tip is weakening the lead hand. For right-handers, that means loosening the grip of the left hand.

By doing this, you take advantage of the club’s loft and its intended purpose of lifting the ball into the air with a backspin.

Els loves having the wedge grip rest in his fingers on pitch shots. With the weak lead hand and the club resting in the fingers of his dominant hand, the golfer can better game each shot based upon the demands of the course.

This attack style helps generate more spin and anchor the club to the ball, allowing you to actually feel it spin off the clubface after enough practice.

When faced with a tight lie that demands a clean pickup off the turf, Els wants to keep the clubface outside his hands on the backswing.

By keeping the hands inside, the club returns to the ball with a shallow approach that reduces the chance of taking a deeper divot, essentially the same as chunking the shot.

Mickelson’s mastery of wedges has propelled him to multiple major titles and PGA Tour tournament championships. Regardless of the distance or whether he’s using a pitching wedge or lob wedge, Mickelson has a play for the ball in mind.

For each wedge shot, Mickelson incorporates a change to his stance in relation to his target on the green.

On shorter wedge shots, say inside 50 yards, Mickelson wants to keep things compact and short. With the ball in the middle of his stance, Mickelson wants his backswing to be relatively quick and crisp.

Getting loose with the backswing, Mickelson told Golf Digest, is an easy way to hit the ball higher, causing you to lose control with your distance and accuracy.

For the high pitch shot, Phil loves grabbing his lob wedge and placing the golf ball just off the inside of his front leg. He then opens the clubface to take advantage of the loft.

Next, Mickelson takes a firm grip because he wants to be aggressive with this shot. After the hit, Mickelson moves smoothly but quickly through the golf ball, accelerating his club, allowing the loft to do the work.

The ball lifts easily with spin, helping it hit softly on the green to maintain distance and accuracy. For pros as skilled as Mickelson, the wedges offer a unique way to attack the cup regardless of whether you are hitting chip shots or full-power swings from the fairway.

Building a better golf game by mastering how to hit wedges with more confidence, as Mickelson suggests, is a great way to increase distance control and deliver the results needed to lower scores.

One of the big advantages that Woods likes to tout with his wedges comes in the form of bounce.

On both his lob and sand wedge, Woods utilizes the wedge’s high bounce along with his hands slightly forward to create a backward shaft line that generates the downward force that makes the ball launch skyward with a high spin.

Why Tiger Wants a Minimal Divot

Woods’ uses a more upright backswing, with the shaft line pointing toward his feet at its peak, rather than the actual ball position.

With each of his wedges, he places slightly more weight on the lead foot to encourage hitting down on the ball, although Woods likes to sweep the ball off the thin green grass.

One of Woods’ coaches, Sean Foley, once told Claude Harmon that Tiger would go through an entire short game workout without taking a divot.

“Tiger fully believed that you should be able to get through your whole wedge practice and your whole short-iron practice without hitting the ground,” Foley told Harmon.

“So he would literally hit a hundred balls, and there wouldn’t be one divot or any sign that his feet had been on the ground whatsoever.”

While that ambition might work for Tiger Woods, amateurs looking to be a good wedge player need to find balance.

Striking the ball with a moderate, consistent launch that lands softly on the green, close to the target, even if it means taking a divot with the leading edge of the wedge, remains the fundamental goal.

Let’s look at his wedge shots: 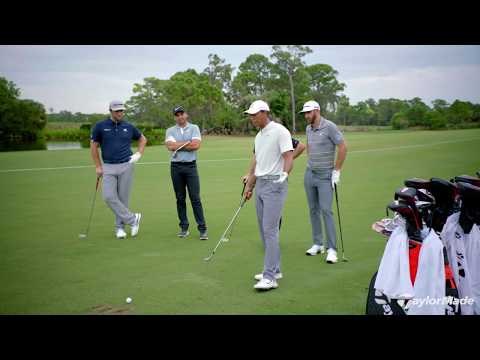 For Spieth, a three-time major winner, the secret to his wedge game comes from his stance.

Spieth places slightly more weight on the front foot to produce a flatter swing that provides a more moderate shot height that offers better control and increases confidence on each pitch shot or chip shot he takes on the links.

With the weight moved toward the left foot in his stance, Spieth wants to deloft the club producing a short finish with a truncated follow through to produce a low shot with a high spin.

For many weekend warriors, it may feel counterintuitive to use the club this way, but with frequent practice on and off the course, players find that their wedges deliver exceptional shots that routinely get close to the cup to help save par.

For amateurs, Spieth’s approach to a modified golf swing needs time and patience. However, working on the range to dial-in the right distance and loft remains the only way to conquer this wedge play tip. 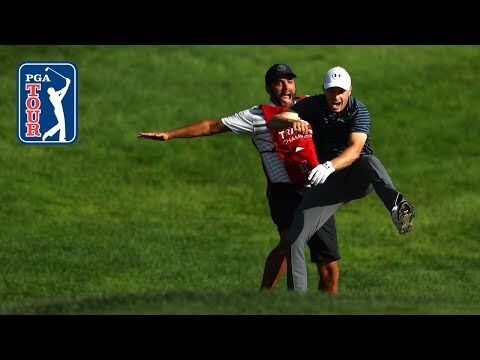 Golf Influence is committed to helping every golfer get the game improvements they deserve.