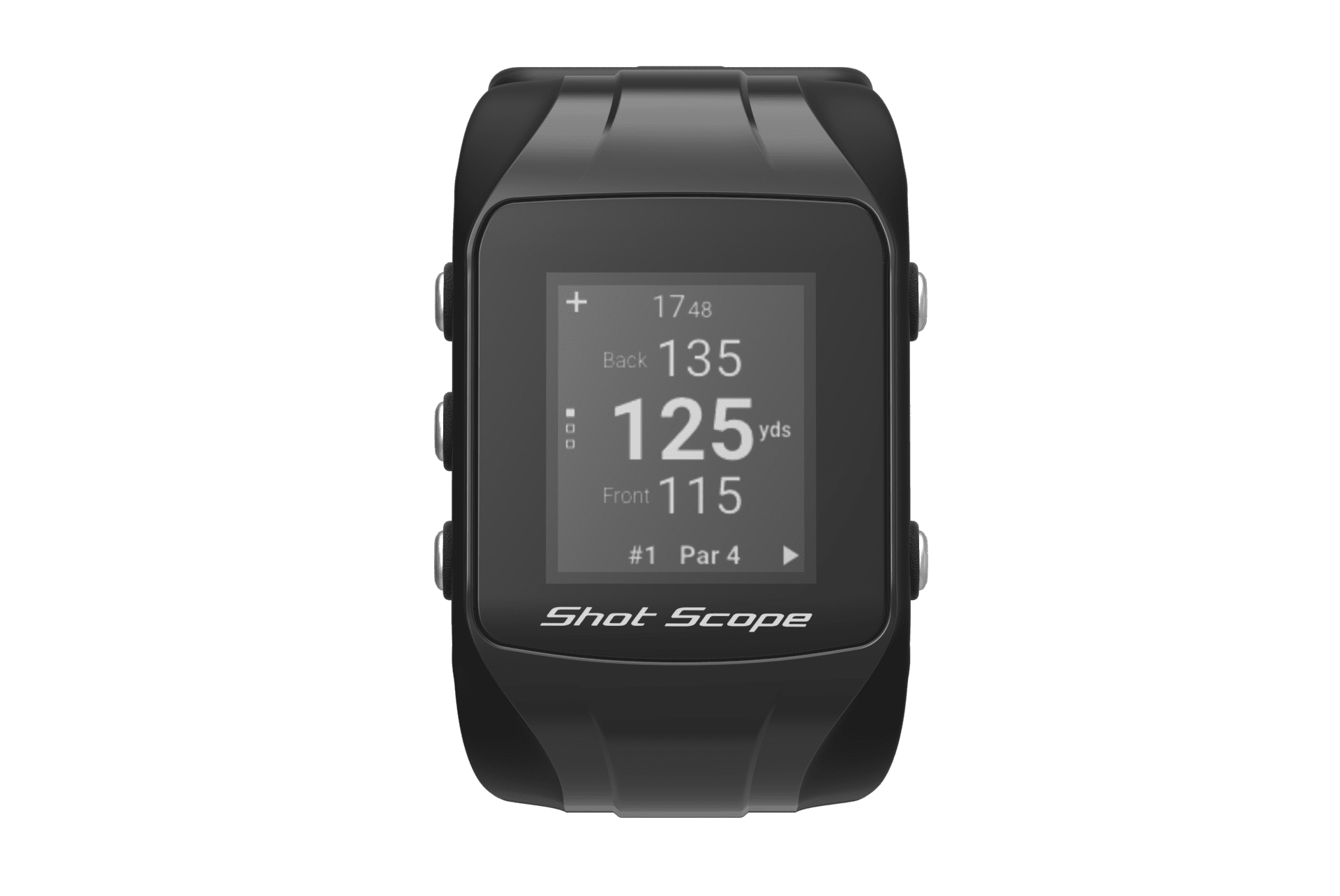 Let us start by discussing the pros and cons of the new Shot Scope V2. 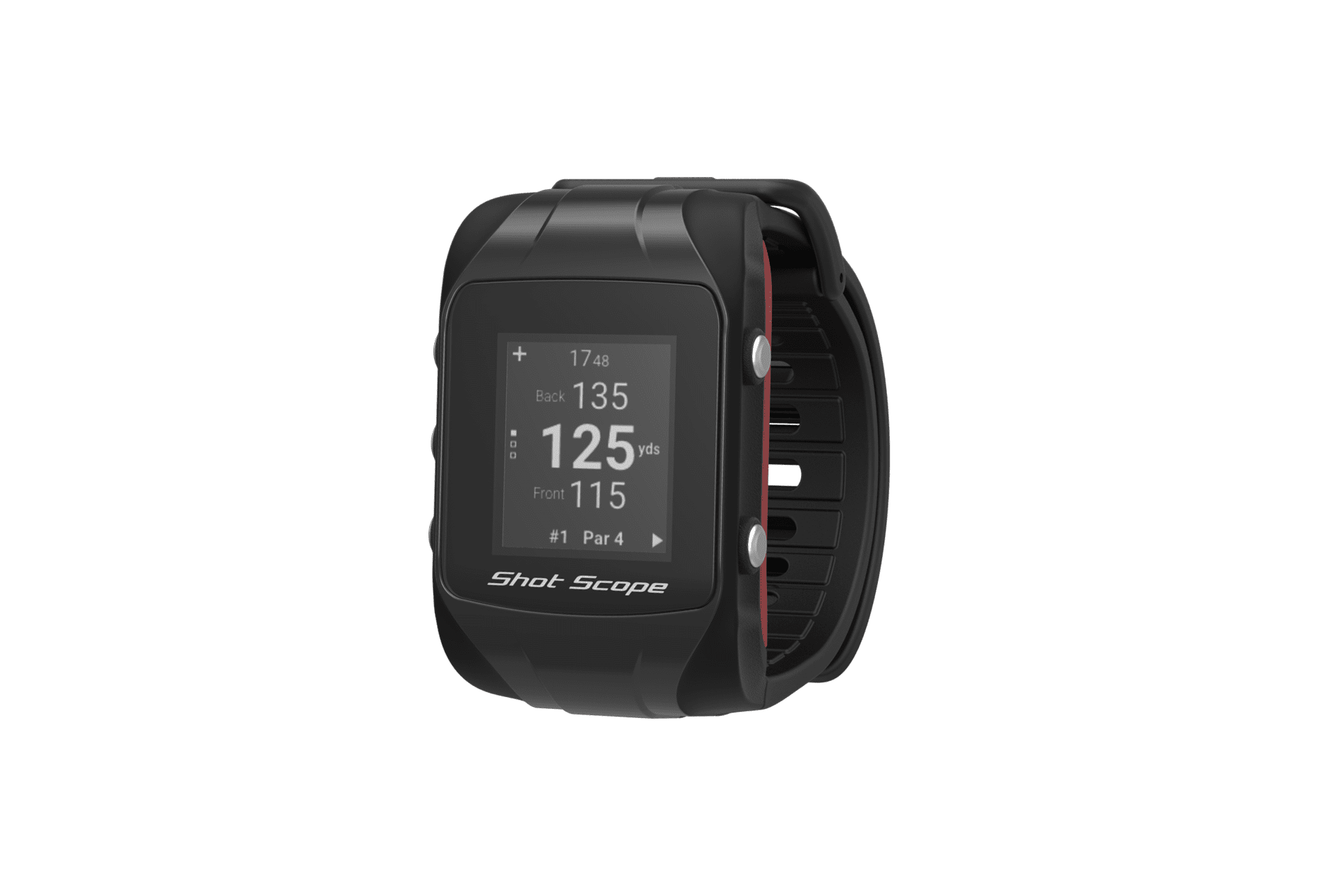 The 1st generation of the Shot Scope was quite a big hit when it was introduced in late 2016. Being one of the first wearable devices for golf, it provides an accurate statistical analysis for us golfers, a thing previously only available for professional tour players.

Below are the key features of the Shot Scope V2, some are unique to the V2, and some are updated features from the 1st gen Shot Scope.

The most obvious change of the Shot Scope V2 over the 1st gen model is the new LCD display.

If there’s any major downside to the 1st gen Shot Scope, it is that it’s not much of a looker. The new LCD display is not only adding functional purposes to the V2, but also makes it looks better than its predecessor.

The LCD display will give you accurate information of your distance to the hole, the current par, as well as other information.

Although it is a very bold claim by Shot Scope, the V2 and its app will have a database of every course in the world.

The imagery is very detailed using both Google and Bing maps, and every course is constantly updated and quality checked by Shot Scope’s UK-based team

New to the Shot Scope V2 is the ability to choose three different modes: GPS if you only want to track distances, PRO if you want to track performance, and GPS+Track to track both.

This feature simply adds another dimension to its versatility.

As with the 1st gen Shot Scope, the V2 operates by tracking the club ‘tags’. The club tags are thin and lightweight, and they are all numbered according to the usual clubs we carry.

To use the tags, simply screw them into the end of the grips. With these tags, once you’ve made your swing, the Shot Scope V2 will detect it automatically and track your performance.

This rather smart feature allows minimal control of the V2, and you can concentrate on your game instead.

With this review, we will divide the discussion into several categories, and we will give a score verdict for each category.

Included in our early review package is the Shot Scope V2 watch unit, and 20 club tags. The watch unit of the V2 looks like a modernized version of 90s GPS watches, which were popular before the arrival of smartphones.

We have to say we really liked the new look of the Shot Scope V2, which is much better than the 1st gen. The monochrome LCD screen looks modern and futuristic, and it is less bulky than the 1st Shot Scope.

Design-wise, the Shot Scope V2 is on par with popular smartwatches and wearable devices nowadays, so you wouldn’t need to worry about maintaining your stylish look on the course.

It can definitely look better, but we don’t have any complaint with the design.

To install the Shot Scope V2, the first thing you will need to do is install the club sensors, dubbed the ‘tags’ to your clubs. There are 20 tags included in the package, enough for 20 different clubs if necessary.

To install the tags, simply screw them to the end of the club grips. Each tag is numbered according to popular clubs, so you wouldn’t need to worry about misplacing them.

After that, simply wear the watch, turn it on and you are good to go. With each swing of your clubs, the Shot Scope V2 will automatically detect your swing and track your performances.

There are several extra features you can try if you want more accuracy, but the basic function is just that simple. After the round, you can upload the data to your mobile app via Bluetooth, or to your computer via USB. After this, all the data will be viewable through the online dashboard.

The mobile app and web app might need a little bit of learning, but will be manageable for most golfers.

The main appeal of the 1st gen Shot Scope was its automated tracking, with the club ‘tags’ being a really creative technology. That appeal is intact with the Shot Scope V2, and is improved quite significantly.

First, the inclusion of 3 different modes adds another layer of versatility to the Shot Scope V2. Second, the LCD display made the V2 watch more functional and informative.

Last but not least, as a GPS tracker, the V2 is significantly more accurate than the 1st gen, as well as other similar apps and devices. The course mapping technology is very accurate, covering all (at least the major) courses around the world, and will be constantly updated.

As with the 1st gen, the Shot Scope V2 tracks your performance once you’ve made your swing, thanks to the innovative club tags technology. It is able to track more than 100 of different statistics, and you can fine-tune your performance tracking preference through the mobile or web app.

The only manual input you will need to do is marking how many putts you took, and everything else is automatic. Also, the new V2 can last for up to 8 hours, so it can last for several rounds.

The 1st generation of Shot Scope was highly regarded as the best shot tracking system back when it was released, and arguably until today. So, if you are a Shot Scope owner, you might want to ask whether the V2 is worth the upgrade. In our opinion, it is a yes, and Shot Scope also provides a fairly affordable upgrade package if you own the 1st Shot Scope.

The web app and mobile app will need a little bit of getting used to, but overall the Shot Scope V2 is very easy to use. It has all the best things offered by the 1st Shot Scope while being a better-looking device with even more features.

I’m a firm believer that reviewing your own performance is one of the most important keys to improve as a player. The Shot Scope V2 offers Tour-level performance review tool for just about any players. Even for beginners striving to improve, the Shot Scope V2 will be an excellent investment.